skip to main | skip to sidebar

Nope, I can't do a full-on review of the soundtrack for the spectacularly done climbing film, Dosage V, by Big Up Productions. I will say this: half of the music in the film was forgettable, leaving me to think the director blew money on no-name, dime-a-dozen music. However...the other half of the soundtrack was placed perfectly and nearly made me forget the beautiful and hair-raising action that was displayed at the same time as the music. After researching the film a bit, I came to find out that the contracted music supervisor did not pick the music I actually enjoyed. Rather, it seemed the great songs were chosen by the production company's young-gunner new employee/music connoisseur/emerging filmmaker, Cooper Roberts. Kudos to Cooper for outdoing a hired music supervisor. 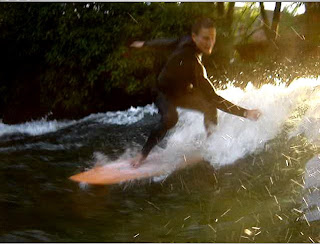 Anywhoo...Cooper has since introduced me to the instrumental song that stole the show by Albert Barti Wuersch. Albert, a part time musician, surfer, snowboarder and climber seems to be living the life we each chase. Spending time exploring the rocks, coasts, rivers (as pictured above), and hills doesn't seem too bad for a full time occupation. After romping around the globe and meeting up with Roberts, Albert eventually contributed some work to Dosave V and recenly mailed me the song I was tapping my feet to - "Single For A Week." Not to be bland, but the song can really be categorized as simple and fun...a perfect song for climbing on the beach, a nice BBQ, or a road trip with sun in your eyes.

Al-berto and the Fried Bikinis - Single For A Week

Instrumental only
Posted by Bodie Johnson at 8:34 AM

You have done a great job on this article. It’s very readable and highly intelligent. You have even managed to make it understandable and easy to read. You have some real writing talent. Thank you.
lyrics

The Asterisk of Mountain Tempo

Howdy! Thanks for visiting this soapbox of mine, produced from the fresh air of the Boulder valley in Colorado. If you have some general comments or maybe want to stand on your own soapbox, feel free to email at bodie_johnson at yahoo.com or leave a comment.

Let's keep the goal in mind here too. I work in the music industry while living in an amazing town offering me an abundance of recreational opportunities. I aim to introduce people to music and artists in hopes that they attend shows, purchase albums and spread the gospel...thus improving my profession and the industry as a whole. If you are an artist, a manager, and/or a label and prefer I remove a song posted here, simply let me know and I'll remove your art.